Castelvetrano, counting some 30,000 inhabitants, is a farming town primarily concerned with the cultivation of vines and olive trees; woodworking, mostly related to the furniture industry, is as much important. The first impression of the town is tainted by the large square glass building, the new hospital. Behind this extends the old town. The focal centre of Castelvetrano hinges on two adjacent squares, Piazza Umberto I and Piazza Garibaldi, and it is in this part of the town that the main monuments are to be found. In the nearby Piazza Regina Margherita, meanwhile, overlooking a pleasant municipal garden is the stark façade of San Domenico (15C), which, at one time, was attached to a convent (now a secondary school) from which it preserves a cloister (entrance to the right of the church); on the opposite side sits the 16C Chiesa di San Giovanni complete with its massive bell-tower.

Piazza Garibaldi – The square is lined with fine buildings such as the town’s main church and the Chiesa del Purgatorio (now an auditorium), the latter an elegant conglomeration of elaborate detail (Classical friezes, false balcony, statues nestling in niches, volutes) drawn from a transitional late Mannerist-Baroque style. Next in line sits the 19C Teatro Selinus, which preserves its original stage. 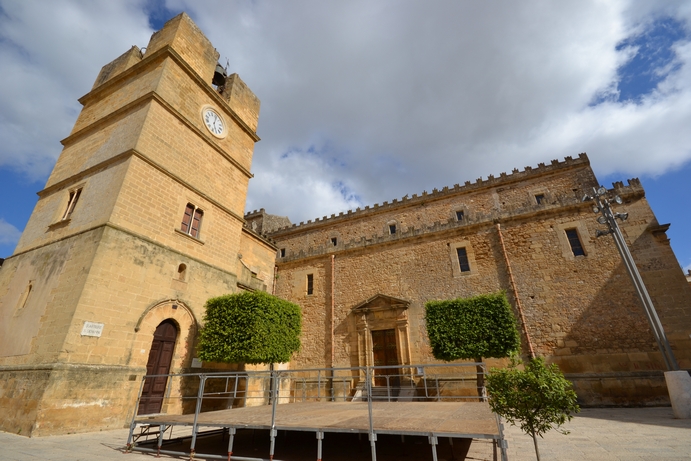 Chiesa Madre – The town’s principal church dates, in its present form, from the 16C. The front elevation rises through two storeys; a pair of pilasters ornamented with garlands flank the entrance at ground level, the upper section is pierced by a rose-window. Swallow-tailed merlons run the length of the side walls. The internal space is arranged according to a composite Latin-cross/basilica plan typical of Norman churches: the nave is flanked by aisles with two transepts, the second terminating in apses (a square-ended one between two round ones). The glorious stucco decoration adorning the triumphal arch is attributed to Gaspare Serpotta (17C, father of the more famous Giacomo): a host of angels bearing festoons and garlands, interplay with others brandishing musical instruments. The same elements are applied to the transept arch, although here the decoration is more restrained. The central ridge of the vaulted ceiling is painted with allegorical figures, inscribed with two dates: 1564 and 1570.

Piazza Umberto – This delightful little piazza lies to the left of the church, providing a clear view of the bell-tower, which is hidden from the front. Gracing the square is a fine little fountain, the Fontana della Ninfa named after the nymph nestling in a niche near the top, erected in the 17C in celebration of the restitution of an aqueduct.

Museo Selinuntino – Via Garibaldi. The 16C palazzo, once home to the Majo family, now accommodates a museum for artefacts recovered from Selinunte. The well-presented displays are arranged around the prize exhibit: an elegant bronze statue of a young man (460 BC) which is famously known as Ephebus of Selinunte. In a side niche nestles a lovely Madonna and Child by Francesco Laurana and his work-shop from the Church of the Annunziata. The museum continues on the first floor with displays of religious objects and three shallow reliefs by the contemporary artist Giuseppe Lo Sciuto.

Santa Trinità di Delta – 4km west: follow directions from Piazza Umberto I. The church is part of the Baglio Trinità farm complex. This enchanting Arabo-Norman church (12C) conforms to a Greek-cross plan with three apses projecting on one side: it is capped by a pink dome. The exterior walls are pierced by single light windows screened with perforated stone panels, inset into articulated surrounds. Inside, the dome hovers above pendentives – a typically Moorish

element – supported by four marble columns with Corinthian capitals. The apses are ornamented with delicate little columns. Resting here and in the crypt are various Saporito family tombs (19C). a powerful local dynasty.

A few metres from the church, on the opposite side of the road, extends the Trinità forestry estate, a lush area of eucalyptus, palm trees and pines. This ideal spot for a picnic looks out onto an attractive man-made lake.