Alcamo lies at the foot of the Bonifato Mount. It began life during the Arab domination and named Manzil Alquamah, in an area enclosed by the Monte Bonifato and Catalubo castles.

Some 1300’s traits are still discernible in the earliest part of the town, with, at the top, outstanding attractions from that period: the Castello, the Piazza del Mercato, the Chiesa Madre and the Convento dei Francescani.

The architectonic design has evolved throughout time, notably following the coming of the various religious orders in town. A period of economic and demographic growth – that was to last for at least two centuries – was recorded in the 15th century following the construction of a harbour area. 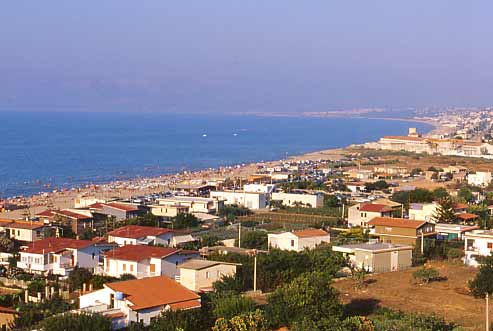 Today, the agriculture, notably viticulture, is still a major resource; commercial and industrial activities – such as the marble industry –, craft – marble, wooden, iron working and embroidery – have also remarkably developed.

Finally, is the most lovely of all, the Chiesa Madre, dating from the 1300s but undergoing changes and restructurations in the following epochs. Inside, are fine frescoes by Borremans and Bagolini; paintings dedicated to St. Philip and St. Carlo Borromeo, and another dedicated to the Fourteen Saints.

The Castello dei Conti di Modica, built in the 14th century, is the most important secular building in town.

The seaside hamlet of Alcamo Marina with its splendid sand beach stands only few kilometres away.