Swirling patterns, vibrant colours, painstakingly detailed designs….. Wherever you go in Caltagirone this is what you will see: ceramics is the name of the game and it has been for millennia.

Virtually all buildings in the old town are decorated with ceramic tiles, shops spill their delightfully crafted wares onto the pavements and the effect is one of multichromatic vivacity.

The highlight is undoubtedly the 142 steps of the Scalinata di Santa Maria del Monte that connect the lower town with the older upper town. The upright of each step is decorated with ceramic tiles, offering a colourful alternative to the grey lava stone of the horizontal parts. During the last two weeks of May the steps are home to a festival known as the “Infiorita” in which they are covered by an enormous floral display. At the end of July (24th and 25th), in honour of the town’s patron saint, San Giacomo, and in the middle of August, the steps undergo yet another transformation, the “Illuminata”. Thousands of candles flicker away creating a truly breathtaking sight. 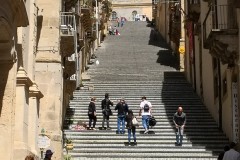 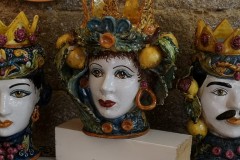 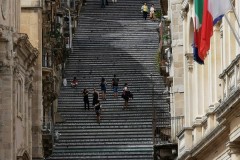 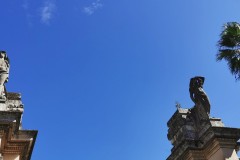 The culture of ceramics is what distinguishes Caltagirone from other towns in Sicily. Indeed, its history mirrors that of so many others: the Romans, Arabs, Normans, Spanish and French all passed through leaving indellible traces of their presence and like the towns of the Noto Valley and Catania, it too was destroyed in the famous 1693 earthquake.
Very much an aristocratic town, Caltagirone is brimming with splendid palaces and churches.

The modern name derives from the Arabic Qal’at Ghiran meaning something like “Castle of Vases”. During their dominion, the Arabs passed on some essential ceramic-making techniques, such as glazing, to the already flourishing local industry.
Caltagirone is very much worth exploring. Only 40 minutes from Catania and close to Piazza Armerina.