The municipality has 4.195 inhabitants and its area is 3.861 hectares for a density of population of 109 inhabitants per square kilometre. It rises on an internal hilly area and is placed 450 metres above sea-level.

Among its agricultural products counts corn, grapes and cereals. Sheep breeding is also present in this place. As regards handicraft it is industrious wood and iron works.

Camporeale is a rural town in the Belice Valley. The Mother church features a crucifix ascribable to Fra’ Umile from Petralia and a Madonna by Bagnasco. The country mansions and the XVII century buildings, which constitute the ancient Camporeale, are not distant from it; don’t miss the Palace of the Princes of Camporeale, which has been recently restored and which is now the seat of the Municipality. The Madonna dei Peccati Sanctuary, lying on a hill, slightly above the built-up area, is also worth a visit. 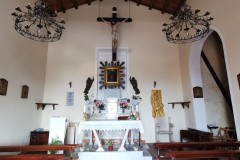 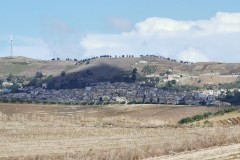 The name of the small town derives from Latin Campus regalis that means:the worthy field for a king.
Until 1954 the commune was dependent by Trapani and only later it turned to Palermo. It has recent origins; in fact it was founded in 1779 by the noble Giuseppe Beccadelli who became the first prince.

A famous character bound to this small town is Antonio Beccadelli, belonging to the same founder’s family. He was a great humanist and in 1400 founded the first Academy of Italian Literature in Naples.