Often called the Aeolian Islands (as the domain of Aeolus, god of the winds), the Lipari Islands are a volcanic archipelago visible from Sicily’s eastern Tyrrhenian coast, easily accessible by ferry or hydrofoil from Milazzo and also Messina. The principal islands are Lipari, Salina, Filicudi, Alicudi, Stromboli, Panarea and Vulcano. Here you’ll find beautiful scenery, volcanoes, castles, thermal resorts, water sports, good fishing and, of course, some great beaches. Do expect crowds in Summer months, and seasonal schedules for hotels and restaurants (which may be closed in Winter).

Geologically, these beautiful islands are quite rugged, with deep caverns, steep cliffs, and splendid views. The volcanoes on Stromboli and appropriately-named Vulcano erupt fairly frequently; Filicudi, Alicudi and Salina are without volcanic activity in historical memory.

Over the ages, the history of the Lipari Islands mirrors that of Sicily and nearby Calabria. Settled in Neolithic times, the islands were formally and extensively colonized by the Greeks in 575 BC (BCE), though far earlier traces of the civilization of the Mycenaeans have been found here –with particularly interesting finds on Panarea from circa 1400 BC which rival those of Thapsos near Siracusa. The heart of a thriving culture, Mycenae was in the Peloponnese of Greece. The Sicels arrived from the Italian peninsula a few centuries after the Myceneans, probably circa 1200 BC. Unlike their predecessors, they established a permanent presence, even if they were eventually subdued by the Greeks.

The islands were much contested by the Romans in their conquest of Sicily. Later, the Turks attacked Lipari, the largest island, in 1544. Pirates often sought refuge in the islands over the centuries.

Lipari, as we’ve observed, is the largest island and in summer, the most crowded. Dominated by Mount Chirica, Lipari has an area of almost 37 square kilometers. It’s almost 10 kilometers in length and about 5 kilometers wide. Lipari’s natural ground water sources haven’t been fully been utilized; freshwater arrives by ship from Sicily, which is about an hour away depending on which transport service you use. From a historical point of view, Lipari is the most interesting of the islands, though Summer visitors come mostly for the beaches. The main locality, called Lipari, is a charming town that boasts a largely reconstructed Norman-era church and a fine archeological museum nearby, though the archeological park is more interesting. The oldest part of the castle was built in Greek times, but the thirteenth-century walls that dominate the structure are naturally more evident. Following the assault of the Turks, the larger walls were built, and these constitute the fortress’s present appearance. There are remains of several towers and other medieval structures on Lipari, and also some Greek and Roman ruins visible in the Diana District Archeological Park. The large Ponente Beach is the island’s greatest natural attraction today.

Vulcano is located very close to Lipari, separated by a wide strait. The highest points of the island are Mount Aria (501 meters) and Mount Saraceno, almost as high. The last major eruption of Vulcano (386 meters) was in 1890. Vulcano’s thermal bath resort, operated by Geoterme Vulcano (090-985 3012), is open year round.

Salina, named for its salt mines, is the second-largest of the islands, and also the greenest, with extensive viticulture. Its twin peaks give Salina a strange appearance. The setting of the Massimo Troisi film Il Postino, Salina is in many ways the ideal choice for a summer holiday.

Stromboli, which with Vulcano is probably the most famous of these islands, is closer to the Calabrian coast than it is to Sicily. Its Greek monuments are not spectacular. Far from the other islands, and dominated by a single large volcano, Stromboli itself is impressive from a distance. Its deep waters are a favorite of divers. Like Salina, the setting for a famous movie, the eponymous Stromboli of Roberto Rosselini, starring Ingrid Bergman.

Filicudi and Alicudi: These smaller islands usually have no direct links to Milazzo, so you’ll have to hop over from Lipari. With their beautiful nature and few residents, they’re a wonderland that seems far removed from Italy or anyplace else.

Panarea and Basiluzzo (anciently known as Hycesia), popular with scuba divers, are even smaller and barely inhabited.

Milazzo: You’ll probably reach Lipari via boat from Milazzo, whose coastal fortress is visible from afar. The citadel is actually Milazzo’s only real attraction, and it’s unfortunate that hardly anybody ever visits this vast structure because within its large “exterior” walls is a splendid medieval castle built during the Norman era. Located on the edge of town, the castle is one of Norman Sicily’s best kept secrets and well worth a visit if you’re a lover of medieval military architecture. The castle was one of the first Norman buildings erected in Sicily, though there were additions over the centuries. In the center of the citadel is the square Norman castle, which somewhat resembles the Tower of London. Milazzo itself was founded as Mylae by Greeks from Zancle (Messina) in 716 BC. Unfortunately, little local evidence remains of this ancient culture, though Milazzo has a civic museum that may be considered exceptional for a locality of its size.

For Visitors: Lipari, in particular, has a number of hotels and restaurants, but book very early if you’re planning a seaside holiday here, because in August this island can be quite crowded. Marina Lunga is the beach area nearest the city of Lipari. The easiest way to get to Lipari is from Milazzo. 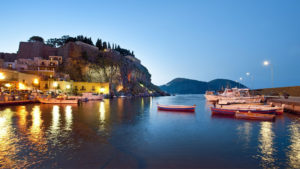