Sitting at a height of 1,196 metres above sea level and cut off from the world below by a series of precipitous drops, Enna is an impressive sight for anyone travelling across the centre of Sicily.

As might be expected from the above description, Enna has always been of great strategic importance to anyone wishing to dominate Sicily. It has been under siege more times than most other towns on the island, and that’s saying something, considering the constant invasions and wars that have marked Sicily’s history.

A visit to the town is well worth the effort, not only for the vast panoramas, but also for the striking castle and the general atmosphere of the place, which is different from anywhere else in Sicily. Indeed, strolling through the streets one has a certain sense of isolation, of being in the middle of nowhere, a feeling that is accentuated by the views of Sicily’s huge, largely empty interior.

Enna is also home to the changing seasons: it was just 5km away, near the lake of Pergusa, that Persephone was abducted by Hades. The legend tells us that when Demeter, Persephone’s mother  and the goddess of fertility and the cycle of life, discovered her daughter was missing, she refused to allow anything to grow.

The land became barren and starvation ensued, causing Zeus to intervene. He forced Hades to hand Persephone back to her mother, but Hades first gave his new bride six pomegranate seeds to eat. This meant that she would have to spend six months a year in the underworld and six on the earth. When with her mother, crops flourished and harvests were plentiful, but when she went back to Hades, infertility reigned. The seasons had been born. 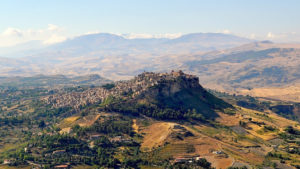