The Parco delle Madonie, situated south of Cefalu, was the second natural reserve to be established in Sicily. It incorporates 15 towns and villages including Polizzi Generosa, the twin Petralia towns, Soprana and Sottana, Gangi, Castellana Sicula, Castelbuono, and Isnello.

Many of these towns have Mediaeval origins thanks to the noble land-owning families that owned huge estates and built castles in the area. Today several castles and many wonderful churches bear witness to this history.

The park covers some 35,000 hectares and is generally mountainous – there are 6 mountains over 1,500m and several others well over 1,000m. The highest, Pizzo Carbonara is 1,979m, second in Sicily only to the mighty Etna (3,323m). As a result, in winter the park is home to three ski pistes.

Another important feature of the Madonie Park is its flora. Indeed, there are over 2,600 different species of plants, many of which are endemic to the area. The colours are particularly beautiful in autumn and spring.

Land over 1,500m is dominated by the Madonie Forest while lower down the slopes, the locals continue to pursue millennial agricultural activities including sheep and cattle farming and the cultivation of wheat, olives and fruit.

One tradition of particular interest in Castelbuono is the production of “manna”, a whitish resin that drips from ash trees when the bark is cut. It is often left to flow and creates stalactitic forms before being collected. Traditionally it was believed to have excellent curative properties for stomach problems, but now is generally used to sweeten local delicacies.

The Madonie’s gastronomic tradition is second to none, relying as it does on local produce for prime ingredients. The meat, sausages, salami, cheese, olives, mushrooms, and fresh seasonal vegetables are all excellent while some of Sicily’s best wine is produced nearby.

The Madonie Park lends itself to walking and hiking with many wonderful routes varying in difficulty and length. Other activities, such as horse-riding and mountain-biking are also fairly common. For children there is also a wonderful adventure playground (Il Parco Avventura) near Petralia. Ropeladder-walking, tree-climbing and all sorts of fun are to be had! There are picnic areas and, if you phone ahead, you can request some local products, such as cheeses, hams, sausages etc. to be waiting for you!

If you are looking for a slightly alternative Sicily, one that does not really exist in the popular imagination, the Madonie mountains will offer a great deal for contemplation thanks to its landscapes, its people and their way of life that has relatively little in common with that of coastal city-dwelling Sicilians. 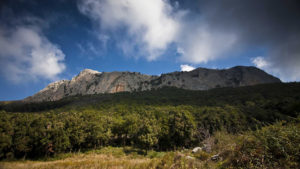