Marsala’s origins are very ancient. In the 8th c. BC the Phoenicians founded the city of Mozia (Motya) in the nearby Stagnone lagoon. Subsequently, refugees from Motya, fleeing from invasion and destruction by Dionysius I of Syracuse, founded Marsala. Probably already known as Lilybaeum it became an important Carthaginian military base, defended by an impressive boundary wall of which traces still remain. After falling under Roman domination (if not before, it was certainly now called Lilybaeum), it was the starting – point of the expedition against Carthage led by Scipio, later known as Africanus. The Romans were followed by the Vandals of Gaiseric and then the Byzantines. When it fell to the Muslirns they called it Marsa-Allah, Port of Allah. The town prospered considerably in the Middle Ages as an important centre of trade and commerce. The Normans took Marsala in 1072, rebuilt the castle and constructed churches and convents. A period of decline began towards the middle of the16th c., but the town, still fortified by its robust boundary wall, continued to be the headquarters of a military garrison and to play an important strategic role. In the 18th c. some enterprising Eng1ishmen set up the first establishment producing marsala wine, which was to have a considerable impact on the local economy.

There are at least four main reasons for visiting Marsala: the Punic traces, the Graeco-Roman Archaeological Park, the Regional Museum, and the Duomo (dedicated to St Thomas of Canter- bury). The Duomo is in the old town cen- tre. It was built by the Normans and extensively altered in successive centuries. The facade, which dominates Piazza della Repubblica (once called Piano della Loggia), presents the original lower order, plus 18th c. fea- tures such as the portai and the moulded frames of the windows. The interior, with a nave and two aisles, is richly decorated with nu- merous works of art: in the left chapel in the presbytery there is a remarkable icon begun by Berrettaro and completed by Antonello and Gian Domenico Gagini. Antonello also did the statue of St Thomas the Apostle, on the plinth of which is the inscription 1 ‘incredulità del Santo (St Thomas’s doubting). The two fine holy water stoups date from 1474 and 1573. (Behind the Duomo, at Via Garraffa 57, is the Museo degli arazzi which contains eight splendid Flemish l6th c. tapestries representing Episodes of the war between Titus and the Jews). Also in Piazza delle Repubblica, which is the centre of town life, is the l8th c. Palazzo della Loggia, formerly the seat of the local administration.

The Chiesa and the Convento di San Pietro are a few steps away, in Via XI Maggio, which runs to one side of the square. This church dates from 1659; ithas afine rose-window and the interior is splendidly decorated. Further along Via XI Maggio we come to the Collegio Gesuìtico, seat of the Civic Contemporary Art Gallery, which is scheduled to be transferred to the Museum in the Baglio Anselmi. Returning to Piazza delle Repubblica we turn right along Via Garibaldi and reach the Porta di Mare (Sea Gate), also known as Porta Garibaldi, in memory of the Landing of the Thousand on 11 May 1860 (hence the name Via XI Maggio). Here we can see Marsala Town Hall, a Iow-standing palace built in the 16th c. which was the headquarters of the Spanish mili- tary garrison and also ofthe Bourbons. 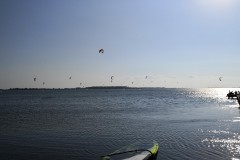 There are numerous other buildings worth a mention: the Chiesa dell’ Addolorata, towards the port, with its elegantly decorated convex façade; the Chiesa del Càrmine (I6th c.), in Piazza del Càrmine, with a portico, a triple-arched façade and a massive, octagonal-plan campanile; the Chiesa di San Francesco (I8th c.) with a fine 18th c. portal; and the Chiesa dell’ltriella (I6th c.) of great dignity because of its refined decoration, still clearly visible despite the poor external state. The Chiesa di Santa Marìa della Grotta was hewn out of the rock in Norman times and restructured in the 18th c. to a plan by Giovanni Biagio Amico. Following the seafront in a W direction we come to the Baglio Anselmi which houses the Museo Archeologico (a baglio is akind of large warehouse that is important in the local wine industry; the architectural style dates from the l8th c.).

The Museum, designed in line with the most up-to-date didactic criteria, is entered through a room with information panels and light-up displays that stimulate interest and illustrate the nature of the rich variety of material to be seen: prehistoric items, including finds from Motya and the surrounding areas, followed by Punic Motya and material from the necropolises of Lilybaeum, arranged in chronological order. In a large room apart, on the right of the entrance, are kept the remains of a Punic ship found in the waters of Stagnone, in the 1970s. It is a unique specimen of a ship of this type. Just before the Archaeological Museum, on the right and isolated in a vast square, is the pretty little Chiesa of San Giovanni which stands over a grotto.

This may have been an early Christian baptistry known as the Sibyl of Lilybaeum, lending weight to the legend of the Sibyl who was supposed to have lived and been buried here. The remains of the Punic Walls are clearly visible in this part of the town. Two groups of Punic tombs, also used in Roman times, are located in Via Struppa and Via del Fante. Further along the seafront, beyond the Museo Archeològico, we reach the westernmost point of the town, Cape Boèo. where is the Graeco-Roman Archaeological Park. Here is an insula of the ancient city (3rd-4th c. BC) with the ruins of Roman dwellings, a small thermal building and some rooms decorated with polychrome mosaics which “seem to reflect motifs of the mosaic repertoire of nearby North Africa”. One mosaic, representing the Medusa, is particularly beautiful, also because of its many colours. The Nonnan Castle is in Piazza Castello. Today it is Marsala prison. We do not recommend that you visit it. 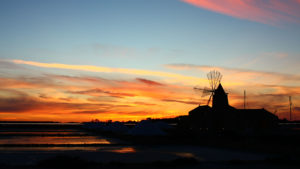