Scylla, one of the monsters that almost ended Odysseus’ fated voyage, inhabits its coastline, Shakespeare chose it as the setting for Much Ado About Nothing, St. Ignatius Loyola founded the world’s first Jesuit college here, and Cervantes spent some time in the town’s hospital recovering after the Battle of Lepanto, possibly dreaming up the exploits of Don Quixote… Messina, the gateway to Sicily!

The early history of Messina reads much like that of many other towns in Sicily: Greek settlement, Roman domination, Byzantine invasion, Arab subjugation and Norman occupation. What Messina does not share with its neighbours, however, is an unfortunate history of disaster.

While other towns, such as Catania, Ragusa and Noto endured a terrible earthquake in 1693 (and Catania several devastating eruptions of Mount Etna), Messina has suffered diversity in all its forms. The first was in 1743 when nearly 50,000 inhabitants died in the plague. Forty years later an earthquake struck, destroying most of the town. After 125 years of relative respite, on December 28th 1908, another earthquake, combined with a tsunami once more laid the town to waste, killing over 60,000 people. Again the resilient townsfolk mourned their dead and rebuilt the city.

The last blow came in 1943 during Operation Huskey, the Allied Forces’ liberation of Sicily. As US and British forces pushed hard through the island, Messina became the last bastion of German defences and suffered significant bombing, razing many of the recent constructions to the ground and killing thousands.

But Messina stands resurgent, capable of enduring anything the Gods may throw at it. It remains the gateway to Sicily and stands proudly on its eponymous Straits, surveying the Calabrian hills across the water. Hundreds of thousands of passengers are shuttled back and forth between Sicily and the mainland each year, especially during the busy summer months.

The ferry crossing takes just 15 minutes, making it perfectly viable, if you’re staying nearby, to make a day trip to the mainland to see the famous Bronzi di Riace in Reggio Calabria and other places of interest. 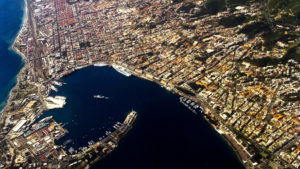