The power and romance of mount Etna, at 3,323m (almost 10,902ft) the tallest active volcano in Europe, and undoubtedly the dominating feature of the eastern part of Sicily have attracted the attention of travellers, artists, poets and philosophers for centuries:

“From whose caverned depths aspire, In purest folds upwreathing, tost Fountains of approachless fire– by day a flood of smouldering smoke With sullen gleam the torrents pour.” Pindar- about 470BC

“We do not what we ought,What we ought not, we do,And lean upon the thoughtThat Chance will bring us through.” Empedocles-about 430BC, who ought not to have thrown himself into the crater to prove that the gases would support his body weight. Chance was unkind.

“The port capacious, and secure from wind, Is to the foot of thund’ring Etna joined. By turns a pitchy cloud she rolls on high: By turns hot embers from her entrails fly, And flakes of mounting flames, that lick the sky. Oft from her bowels massy rocks are thrown, And shivered by the force come piece-meal down. Oft liquid lakes of burning sulphur flow, Fed from the fiery springs that boil below.” Virgil – about 20BC

“I would jump down Etna for any public good – but I hate a mawkish popularity.“ John Keats Letter, April 9, 1818 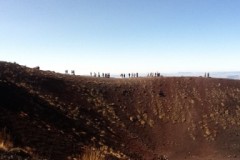 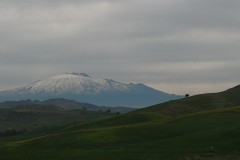 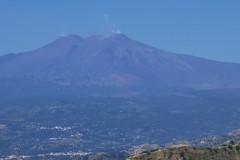 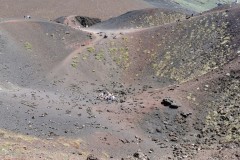 “..Etna, that wicked witch, resting her thick white snow under heaven, and slowly, slowly rolling her orange-coloured smoke. They called her the Pillar of Heaven, the Greeks. It seems wrong at first, for she trails up in a long, magical, flexible line from he sea’s edge to her blunt cone, and does not seem tall. She seems rather low, under heaven. But as one knows her better, oh, awe and wizardry! Remote under heaven, aloof, so near, yet never with us. The painters try to paint her, and the photographers to photograph her, in vain. Because why? Because the near ridges, with their olives and white houses, these are with us. Because the river-bed, and Naxos under the lemon groves, Greek Naxos deep under dark-leaved, many-fruited lemon groves, Etna’s skirts and skirt-bottoms, these still are our world, our own world…If you would see her, you must slowly take off your eyes from the world and go a naked seer to the strange chamber of the empyrean. Pedestal of heaven!…“D.H. Lawrence 1920-22

“A’ Muntagna” (“the mountain” in local dialect) has always dominated the lives of those who live in its shadow: Its lava flows and dust clouds bring destruction, but they also enrich the soil, making the lower slopes and the surrounding plains some of the most fertile regions in Sicily, and spawning vast expanses of vines and citrus plantation. The periodic eruptions have been well documented through history, from the tales of Pindar to the modern day. Recent eruptions have been spectacular in their nature, though quite safe as they start far from inhabited areas. Whenever Etna erupts, journalists and travellers are drawn from all over the world to admire (from a safe distance) the unique sight of the smoking craters and snaking lava flows, which are visible from miles away. Hiking on Etna is a fabulous experience and you will get much more from it if you take advantage of the knowledge of one of our qualified guides. A cable car takes some of the sweat out of the trip up, and the descent past the awe inspiring Valle del Bove with its deep canyon of spent lava flows is an experience you won’t forget in a hurry.

There are two main points of departure for a trip on Etna: Etna Sud (la Sapienza) from which you may either walk or take the cable car to 2,900m, from there it is a 2-4 hour round trip to the summit craters, although there is no need to go that far to get a good feel for the majesty of the mountain. The other point of departure is Etna Nord (Piano Provenzana) from where you may walk or take 4X4 buses up to the observatory at 2,400m. You may walk to the summit craters from there.

We would strongly discourage you from venturing to the main craters of Etna without a qualified guide. Apart from the volcanic aspect, you must remember that this is a very high mountain and should be respected as such. The weather can change quickly, and it can get very cold even in the height of summer. If you are planning on doing anything more than stepping out of the cable car to look at the view, you should be properly equipped with good boots, long trousers, a couple of warm outer layers, hat, gloves and a waterproof jacket. Make sure you take some water and food too. 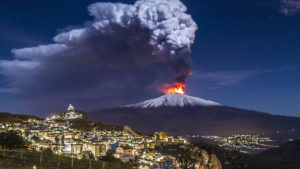