Yes, it’s Sicily! Or at least the most untouched part of the island: the Nebrodi Mountains. Quite why this area doesn’t attract many tourists (or Sicilians!) is a mystery to anyone who has been there. The opening paragraph contains no exaggeration and, should you get a chance to explore this fascinating area during your time in Sicily, you too will sing its praises.

In 1993 the Nebrodi National Park was instituted and, with a surface area of just over 85,000 hectares, it is the largest in Sicily. The variety of fauna is vast and alongside the more common animals such as wild cats, foxes, porcupines and hares there are even a couple of indigenous species: the San Fratello horse and the Nebrodian black pig. The meat of this latter is a highly prized ingredient in the area’s cuisine and it is also used for making hams and salamis. The famous salame di Sant’Angelo di Brodo is one purchase you might like to make.

The highest mountain, at 1847 meters, is Monte Soro. The views from here are simply breath-taking: Mount Etna with its plume of smoke to the south-east, the Aeolian Islands emerge from the Tyrrhenian to the north and the Madonie Mountains continue the Sicilian Apennines to the west. While the peaks in the Nebrodi Park are not as high as those of its neighbours, the presence of several wonderful lakes adds a certain variety to the landscape. Of these, Lago Biviere and Lago Ancipa are well worth a visit, the latter also thanks to its stunning views of Mount Etna framed in a natural paradise. Good walking and mountain-biking opportunities abound.

Many of the towns originated with the arrival of Byzantine Greeks in the 4th and 5th Centuries AD and remains of Byzantine monasteries and churches can be found dotted around the area. Some of the most important centres are Mistretta, Troina and Nicosia, though many smaller villages, such as San Marco d’Annunzio, San Salvatore di Fitalia, Floresta and San Fratello are worth visiting. This last, in particular, is home to the lovely Convento di San Francesco, complete with cloisters, and a Norman church dating back to the 11th Century

To get the most out of the Nebrodi one has to explore, follow one’s nose and take chances. An unassuming-looking path might lead to a beautiful wood or lake, a seemingly normal village might hide a fantastic church or a wonderful trattoria and the humblest of food shops might sell mouth-watering local delicacies. 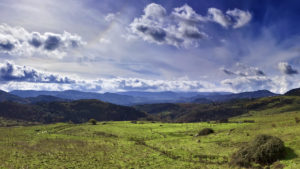