Pantalica is found near the Anapo river and the Ferla and Sortino localities in a canyon not too far from Siracusa. The site is famous for its necropoli carved in squared forms into the limestone. Numbering around five thousand, the tombs were carved beginning in the twelfth century BC (BCE). This is one of the oldest archeological sites in Sicily, and was largely abandoned by the time the Greeks settled the area in the seventh century BC, but in the Middle Ages the Arabs established a community here.

Who built Pantalica? What do we know of the people who once lived here? They were probably part of a neolithic civilisation which later, with the early use of metals, came to be identified with the Sicanians. When the Sicels (or Sikels) arrived, they displaced the Sicanians, who had at one time inhabited most of Sicily. Yet the “Proto Sicanian” influence may have spread as far as Malta.

By 800 BC these communities flourished westward in the area of the Sicanian Mountains which bear their name. Cefalù’s Temple of Diana was built by Sicanians.

One of the earliest structures at Pantalica, the Anaktoron, is a megalithic building which may have been influenced by Mycenaean architecture. We know that there were Mycenaean settlements along Sicily’s Ionian coast, and this suggests close contact between them and the native Sicanians. Though Pantalica itself is a cemetery, there were settlements nearby. Not many certainties can be deduced about the ancient people of the Pantalica area. Other Mediterranean cultures (for example the Egyptians) were far more advanced. As so often happens in historical studies, what we know is eclipsed by what we do not know.

There are a few necropoli carved in circular forms, and in fact the tombs of Pantalica are linked to two periods of exceptional development. Pantalica is a very natural setting for these tombs. The gorge formed by the Anapo and Calcinara is a a focal point of natural beauty, both flora and fauna.

Coming from Ferla the visitor benefits from a more gradual path. Entering from Sortino, the descent is a more demanding hike. Sicily boasts a similar site not too far from Pantalica; Cavagrande Cassibile is a splendid canyon and nature reserve where a small number of necropoli are carved into the limestone cliffs. 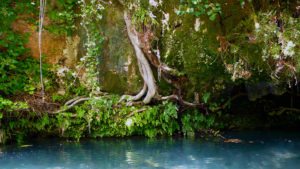