To the south of the western most tip of Sicily and closer to Africa than to Europe, lies the “black pearl of the Mediterranean”, the volcanic island of Pantelleria. The largest of all Sicilian islands it was the first stepping stone for the Arab invasion of Sicily in the eighth century AD and its name derives from the Arabic “Bint-al Rion” – Daughter of the Wind.

Pantelleria is one of Sicily’s most characteristic minor islands and is not part of an archipelago like the Egadis or the Aeolians. Its rocky coastline, sometimes dramatic, sometimes gentle, extends for just over 31 miles but encapsulates a great deal.

Historically speaking, like most islands in the middle of the Mediterranean, dominating civilisations (including the Phoenicians, the Romans, the Arabs and the Spanish) have come and gone, all leaving their mark in a mesh of interwoven cultures. However, with just 30 miles of open sea separating Pantelleria from Tunisia, Arabic influences are most evident – the traditional houses, “Dammusi” (of which more later), were first built in the 10th Century during Maghreb dominion, the two most famous local wines, Moscato and Passito are made from Zibibbo grapes, which were imported by the Arabs, and many Arabic place names remain.

As the origin of the name might suggest, the climate is dominated by the gentle breezes that blow almost continually, keeping the temperature below boiling point in the summer months and nudging away rain clouds in the winter (the average annual rainfall is just 350mm).

The interior of the island is characterised by lava stone walls, several volcanic peaks and scattered Dammusi. These houses, built in local lava stone, have domed roofs which, thanks to their form, also function as a means of collecting rain water. The thick walls keep the interior cool in summer and provide insulation during the winter. Typically, around the main living quarters were stables, a courtyard and a wood-burning oven. Being just one storey, and thanks to their colour, the Dammusi blend into the surrounding countryside, virtually without altering the general lay of the land.

Well worth a visit in the interior is La Montagna Grande, a National Park area and the island’s highest peak, which, at 836m offers wonderful views not only of Pantelleria and the sea, but also, on a clear day, of the North African coast. On the north-eastern foothills of the mountain is “Lo Specchio di Venere” (Venus’ Looking Glass), a volcanic lake fed by thermal springs. Its name comes from the legend that Venus stopped here to admire herself and to compare her beauty to that of Psyche, her rival in love. While being a centre for water sports and thermal baths, it is also a haven for a great many types of birds that take a break here during their marathon migratory journeys.

But of course it is the sea that attracts most visitors. 300-metre cliffs, inlets, caves and grottos line the coast making circumnavigation of the island greatly interesting. The symbol of the island, or at least the most photographed feature, is the “Elephant”, a sea stack that is still connected to the mainland. From certain angles it has an uncanny resemblance to that pachyderm we all know and love. Local legend has it that when the island is short of water, the Elephant sucks up sea water to refill the reservoirs!

The unpolluted water of the surrounding sea means that the variety of marine life is enormous and several species, such as monk seals, that are no longer seen in other areas of the Mediterranean populate the waters. Pods of dolphins are also frequent visitors and scuba diving is excellent.

However, no holiday would be complete without good dinners, and Pantelleria has much to offer gastronomically as well. As would well befit an island, fish is king and the freshness and quality is fantastic. Other local specialities to be tried are ricotta and mint ravioli, pesto pantesco (olive oil, tomatoes, garlic, basil and peppers), capers (one of the major agricultural products of the island), fish couscous, and Sciakisciuka, a spicy Med stew with courgettes. All this to be washed down with lashings of Passito di Pantelleria, a truly excellent dessert wine. 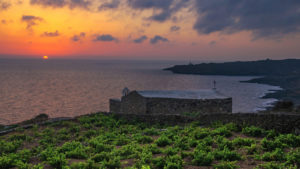