The town was founded in the pre-Hellenic age by the Elimi, a population of uncertain origin, probably oriental. It soon took on major importance, both economically and because of its strategic position between the Punic towns on the northern and western coasts. It was the eternal enemy of Selinunte, against which in 409 B.C. it called for the help of the Carthaginians, who razed Selinunte to the ground.

The destruction of Selinunte marked once and for all the entry of Segesta into the Punic orbit, but this had no influence on the customs of the people that, on the contrary, became more and more Hellenistic. Under the Romans, the town was well treated, thanks to a blood relationship supposed to exist between the two peoples, but nevertheless it declined, and its name was quite forgotten. So far little of it has been excavated, though diggings have already brought to light the first vestiges of the ancient dwellings. 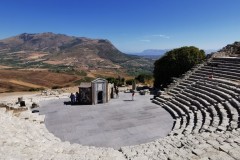 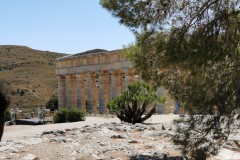 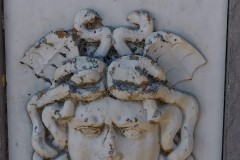 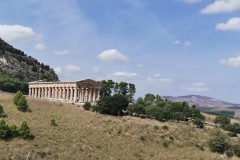 Two monuments have also been brought to light: the theatre and the temple. The former, founded in the fifth century at the top of Monte Barbaro, in a very picturesque position, was rebuilt in the Hellenistic age and now has the look dating from that period. The pit has a diameter of 63 m. and is well preserved, while of the stage there only remain the lower structures. The theatre is used for international performances specially poetry, reading, ballet and ancient tragedies.

The temple is probably the main building of a suburban shrine which is still unexplored. Also built in the fifth century, it is a six column per row peripteral building. It is unfinished; the grooves were not made in the columns, and there is no trace of a roof and a cell. The temple looms up solitary on a hill in a very charming position, and it is one of the most perfect and best preserved examples of Doric art. 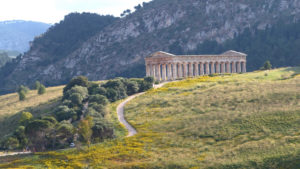