Located near the southeastern corner of Sicily on the Ionian coast, Siracusa (Syracuse) is built on an ancient Greek settlement founded by Corinthians in 734 BC (BCE), displacing the Sicels (Sikels) and indigenous Sicanians.

More than any other modern city in Sicily, Syracuse manifests a visible continuity from its ancient Greek past, both historical and mythological. Its older quarter is an island, Ortegia (or Ortygia, from the Greek for “quail,” probably named for that bird’s abundance in this area). Ortegia is known for, among many other things, the freshwater Spring of Arethusa. When Artemis changed Arethusa into a spring of water to escape the river god Alpheus, it was here that the transformed maiden emerged. On a more factual note, Syracuse was the city of Archimedes, Pindar and Aeschylus. It was the most important city in Magna Graecia, with a population of around 300,000, and for a time rivaled Athens as the most important city of the Greek world. However, it was not the first “Greek” settlement in Sicily.

Thapsos, site of an ancient Mycenaean settlement not far from Syracuse, has yielded finds dated to circa 1500 BC. Other traces of this civilization in Sicily have been found at Panarea in the Aeolian (Lipari) Islands. Given the seven centuries separating them, it would be incorrect to presuppose an extremely close link between the Mycenaeans (of Mycenae in the Peloponnese) and the Corinthians who founded Syracuse, but they broadly shared the same origins and aspirations.

Athens, Carthage, Rome. These were the only three cities of the ancient Mediterranean world to challenge the power and prosperity of Syracuse during its Golden Age. Though it was an important city from the time of its foundation, Syracuse flourished unhindered after Hieron’s victory (with the help of the Agrigentans) over the Carthaginians at Himera, near present-day Termini Imerese, in 480 BC, and soon became the most important Greek city in Sicily, both economically and politically. It would not be overzealous to say that the history of Hellenistic Sicily is largely the history of Syracuse.

Let’s consider the city’s ancient structures before looking at its medieval treasures. Some of the ancient sights to see in Syracuse are located in Ortigia (Ortegia), which is the medieval city’s historic center. Ortigia is reached via the Ponte Nuovo, or “New Bridge.” However, some of the more spectacular of the ancient landmarks are on the Teminite Hill, on the city’s periphery, in an archeological park near Viale Teracati and Via G. Emanuele Rizzo. Greek and Roman structures are ubiquitous in Syracuse; even a wall of the cathedral was part of a Roman structure, the Temple of Minerva. 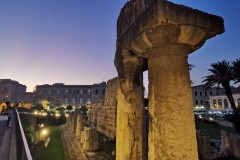 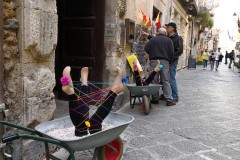 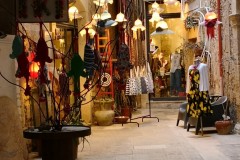 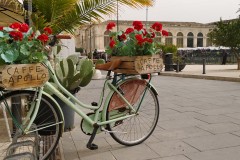 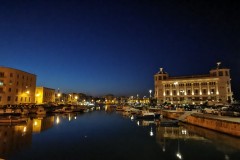 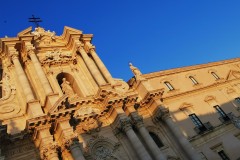 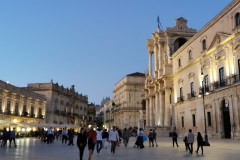 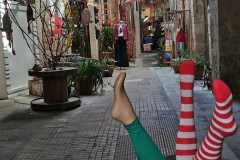 Located in Ortegia, the Temple of Apollo, or Artemis, is probably the oldest Greek temple(Please activate your JAVA to open this link.) in Sicily built in the Doric style, dating from around 565 BC. This is thought to be the oldest Greek temple outside present-day Greece. Unfortunately, only its remains can be seen in Piazza Pancali. Nearby, in Piazza Duomo, the 5th century BC temple known as the Athenaion (and also part of the Temple of Minerva) forms a side of the cathedral. This is one of the few surviving examples in the former Magna Graecia of a temple being turned into a church, though in Rome examples abound. A medieval church at Taormina was also built on the site of an ancient temple, though not in precisely this manner. Closer to the Sea, the Spring of Arethusa, which takes the form of a large round fountain, is reached either from the Foro Italico or Via Capodieci. Among Ortigia’s medieval relics is Maniaces Castle, named for the able Byzantine general (George Maniaces) who occupied part of the Ionian coast of Sicily during the 1030s. Most of the medieval structure was actually built during the reign of Frederick II two centuries later, though the fortress has been extensively modified in successive centuries.

The city’s patron saint, St. Lucy, was martyred near the site of the church of that name, in Piazza San Lucia, in 304. The church itself was built during the Byzantine era, restructured by the Normans during the 12th century but, modified almost beyond recognition in the 17th century. Beneath the church are extensive catacombs.

In the Neapolis Archeological Park on the Terminite Hill a clear distinction can be made between the Greek and Roman structures. Siracusa has a Greek amphitheatre (literally carved out of the rock) and also a Roman one, both well preserved. (Please activate your JAVA to open this link.) In conformity to tradition, the Greek Theatre is semicircular and open, the Roman one oval and enclosed. This archeological park has some charming surprises, such as the Altar of Geron II and the Ear of Dionysius, formerly a limestone quarry. There is also the Saint Venera Quarry and various necropoli and other caverns. Quarries are not exclusive to Neapolis; there are several elsewhere in Syracuse, such as the Capuchin Quarry in the city.

About eight kilometers due west of the city towards the Belvedere locality is Euryalus Castle, an ancient fortification complete with moats and immense walls. It was probably designed, at least in part, by Archimedes, a distinguished military engineer. This vast fortress was remarkable in 401 BC, when it was built, and still magnificent when it was later expanded during Byzantine times. For that matter, it is still impressive today. To the Greeks, it was a defense against Carthaginians and then Romans (it fell to Marcellus due to betrayal rather than siege). To the Byzantines, it was a bulwark against the Saracen threat. In 309 BC, during the war against the Carthaginians, it held 3000 foot soldiers and 400 horsemen. Euryalus Castle today is may be a shadow of its former self, but it remains one of the few examples of Greek defensive architecture anywhere.

The castle itself was part of an extensive defense system that included 27 kilometers of walls around what was one of the largest cities in the Greek world. Dionysius the Elder developed the city in this way to make it safe from any attack. In this he succeeded to a great extent.

The Roman Gymnasium is located near off Via Elorina near the Porto Grande (Large Port). Built during the 1st century AD, it included a temple, theatre and court. Located below sea level, it is sometimes flooded.
Another Greek settlement, Megara Hyblaea, on the coast about 10 kilometers south of Augusta, is north of Syracuse, conveniently reached by local train via the Megara-Giannalena station.

The Orsi Regional Archeological Museum, one of Sicily’s finest and most modern, displays finds from Megara as well as ancient Syracuse, and is well worth a visit. This structure exhibits archeological treasures in their proper historical context. In many respects, it is superior to Palermo’s Archeological Museum, though the collections are actually somewhat different. It is located on the grounds of Villa Landolina off Via Teocrito, near Saint John’s Abbey.

Saint Paul visited Syracuse around AD 59, and here you’ll find the most extensive Paleo-Christian catacombs outside Rome itself. Adding to the city’s religious heritage are the recently-discovered Jewish baths in Ortigia, which are at least 1,500 years old.
Syracusa’s medieval heritage mustn’t be overlooked. A few sights stand out. Saint John’s Abbey (on Via San Giovanni) was largely destroyed during an earthquake in 1693, but parts of the church’s facade and cloister courtyard still stand. (Please activate your JAVA to open this link.) The catacombs are interesting, and the Crypt of Saint Marcian offers a glimpse into the Paleo Christian era.

The Bellomo Palace, on Via Capodieci, was built as a castle during the 13th century and restructured in the Catalan Gothic style during the 15th. (Please activate your JAVA to open this link.) It houses the Art Gallery, whose collection includes Caravaggio’s Burial of Saint Lucy, Antonello da Messina’s Assumption, and other notable works.
Palazzo Montalto, near Piazza Archimede, was built in 1397 in the so-called “Chiaramonte Gothic” style; its arched windows resemble those of Palermo’s Steri, built in the same style almost a century earlier. The Fountain of Artemis in Piazza Archimede is attractive, though perhaps overrated in such a monumental city as this one.
If Palermo offers more medieval monuments than any other Sicilian city, Syracuse is unsurpassed for its ancient architecture and warm people.

For Visitors: Yes, there are beaches nearby, and there’s no shortage of good restaurants in Syracuse, but we suggest you avoid those that offer “tourist menus” in favor of the charming pizzerias and seafood restaurants. The seafood specialties are seasonal to some extent. The pasta dishes with mussels and urchins are especially tasty but more available in Spring and Fall than Summer. 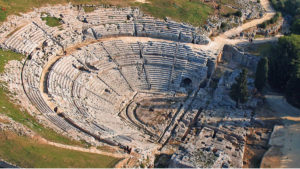