When nearby Naxos was destroyed by Dionysius, the tyrant of Syracuse, in 358 BC, a group of survivors founded the Greek city called Tauromenion; the acropolis was at the sumrnit of Monte Tauro and the agora where Piazza Vittorio Emanuele II is situated today. The town expanded considerably in Roman times; butin the last decades of the Ist c. BC Octavian punished its inhabitants for helping Sextus Pompey, deporting them and reducing the town to the level of a colony; Taormina thus began to de- cline, until the Byzantinesreversed its fortunes when they chose it as the capital of E Sicily.

The Arabs destroyed it twice, in 902 and 962, after which they partially rebuilt it. Under the Norman dominationthe town spread to the area known as the Borgo, and it developed further in the 13-15th c. Taormina has however developed most in the 19th c., becoming an internationally renowned tourist resort. Its scenery, together with the three columns of the Temple of the Diòscuri at Agrigento, the Arab cupolas of San Giovanni degli Eremiti in Palermo, and the moving clock-tower outside Messina Cathedral, are all stamped together in the collective imagination as desirable places to be visited.

The first thing that everybody wants to see on flrst arriving at Taormina is the scenario of the theatre with the panorarnic view behind it of Etna and the sea. Normally, to reach the theatre, the visitor passes slowly through the town, where there is a great deal to see -we however will go straight to it. The Theatre is in Via Teatro Greco, and it is truly magnificent; built in Hellenistic times and then almost completely reconstructed by the Romans, it is the second largest classical theatre in Sicily (max. diameter 109 m), only surpassed by that of Syracuse. From high in the cavea (the horseshoe shaped auditorium) and even better from the terraces above the stage, one can enjoy an unforgettable panorama. 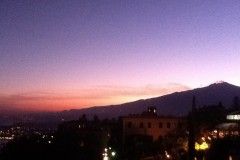 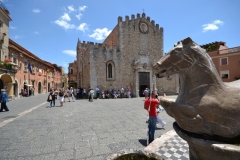 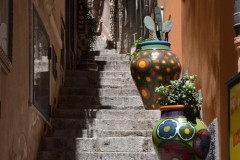 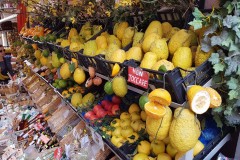 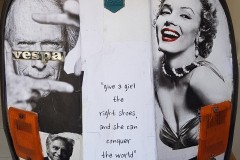 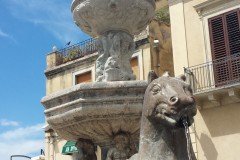 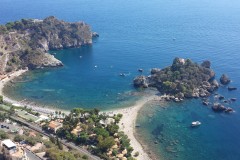 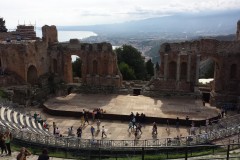 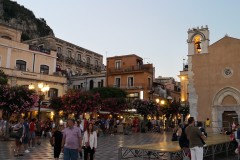 On the E side ofthe cavea are the ruins of a little temple, and a little further off there is a small restructured Antiquarium, with archaeological finds from the Taormina area. If we enter the town from the N, by way of Porta Messina (having used, for example, the cableway from Mazzarò, or the motorway), we immediately arrive in Piazza Vittorio Emanuele. Here stands Palazzo Corvaja (seat of the first Sicilian parliament, 1411 ), the most ancient part of which is an Arab tower, the nucleus ofwhich was extended by the Normans and later in the 14-15th c. Nearby is the 17th c. Chiesa di Santa Caterina, constructed on visible parts of a Hellenistic temple; behind this church are the remains of the Ro- man Odeum, dating from the Imperial Age, which itself stands on the same Hellenistic remains. Just before Porta Messina is the Chiesa di San Pancrazio, built on the ruins of the Hellenistic tempie of Jupiter Serapis, the walls of which are still discemible in the side walls oft he Christian church. The Via Teatro Greco is to the left of Piazza Vittorio Emanuele. Some visitors, either singly orin par- ties, arrive from the W approach, through Porta Catania.

This is near the Post Office, which is handy for anybody wanting to send a few postcards. Also not far off, in Via de Spuches, is the Palazzo dei Duchi di Santo Stèfano (13th c., built over a pre-existing Islam structure ), now the seat of the Giuseppe Mazzullo Foundation, which has a perrnanent exhibition of the works of this sculptor, who was bom in the Province of Messina, at Graniti, in 1913 (d. 1988). The Foundation is also used for cultural meetings. We can now tum into Corso Umberto and reach the Cathedral, or e1se   tum right for the Convento di San Domènico (now a de-luxe hotel), which stilI preserves part of the l6th c. cloister, the l7 -18th carnpanile, and monastic fumishings from the intemal rooms.

The Villa Comunale (Town Gardens) is quite near here. The Cathedral, St Nicholas, 13th c., a severe, battlemented construction, rebuilt in the 15th and 16th c. and again altered in the 18th c., has a composite façade, with a portal, single-light windows and a rose window. It as a nave and two aisles separated by columns supporting the arches; above the altars we can see The Visitation (a panel painting by Antonino Giuffre, l463), a polyptych (by Antonello de Saliba, l504), The Madonna and Child (Gagini school, l500), and St Agata (by Martino Montanini, 16th c.). In the bishop’s chair, near the high altar, are column-bearing lions and the arms of the town, which are also symbolized by the bull woman standing above the baroque fountain, which must already have been noticed outside the square.

From the Corso, a short passageway leads to the Naumachìe, a wide Roman terrace ( with the tank for the aqueduct ofthe time). Further along Corso Umberto, among bars, shops and souvenirs, we at once see 15th c. Palazzo Ciàmpoli, with a stairway leading up to it; and soon we arrive at Piazza IX Aprile and the late mediaeval Porta di Mezzo, altered in the 17th c.; this gate is in fact an opening in the Clock Tower. We are now in the mediaeval quarter of the Borgo. Here also is the Town Library in the former Chiesa di Sant’ Agostino, where there is an altar-piece representing St Sebastian. The by-pass road, which can be reached from here, leads us to the Badìa Vecchia (Old Abbey) or Badiazza, a Norman fortification altered in the 14th c.; this road also takes us, by way of Via Castelmola, to Taormina Castle, on Monte Tauro (298 m). 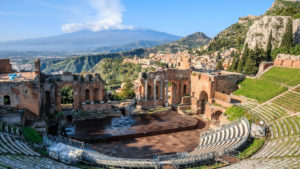