Hot African winds, long, sun-drenched summer days and shallow coastal waters….. the perfect recipe for salt-making, thought the Phoenicians some 2,700 years ago. Today, the very same conditions are still being put to good use in the salt pans between Trapani and Marsala.

Salt was, of course, a hugely important commodity for the preservation of food and so the west coast of Sicily soon had a fundamental role to play in the daily life of thousands of people around the Mediterranean and in Europe.

There are two main areas of production, one at Nubia, just south of Trapani, and one at the “Stagnone”, the largest lagoon in Italy, a few miles north of Marsala. Now a designated marine nature reserve covering some 2,000 hectares, the Stagnone is home not only to the ancient tradition of sea-salt production but also to a flourishing variety of wildlife, and a fascinating archipelago consisting of four mostly uninhabited islands: San Pantaleo, home to ancient Mothya, one of the Phoenicians’ original settlements in Sicily, Isola Longa, Santa Maria and Schola. 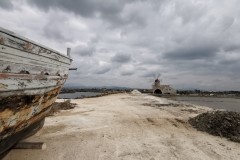 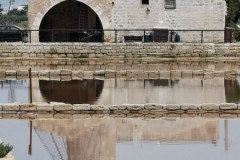 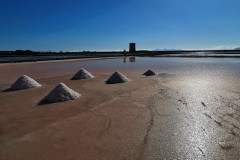 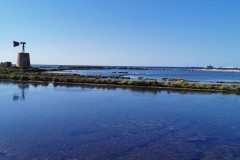 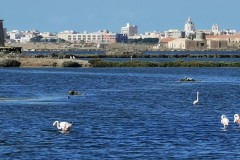 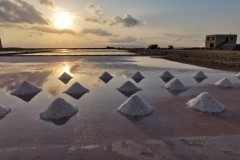 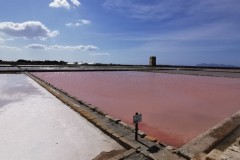 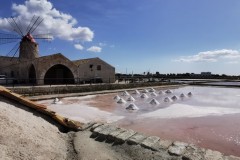 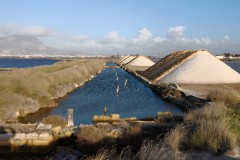 The salt pans at the Stagnone are particularly worth a visit and offer a truly unique landscape. Windmills, first introduced during mediaeval times, dot the horizon, a testament to how things were once done, though one or two continue to function, pumping water through the sluice gates into or out of the various basins. Piles of harvested salt, neatly covered with terracotta tiles, lie between the road and the basins waiting to be despatched.

Salt production along the coast reached its peak just after the Unification of Italy in 1860, when 31 salt pans produced over 100,000 tonnes per year, much of which was exported all over Europe, as far away as Norway and Russia. Today, although demand is much diminished, there is still a niche market amongst gastronomes who swear by the salt’s unique qualities: it is 100% natural and contains a higher concentration of potassium and magnesium that common salt but less sodium chloride. The lack of chemical treatment means that the trace elements are maintained, enhancing its flavour. It is particularly good for fish dishes and can be found in many specialist food shops.

Midway between Trapani and Marsala, on the banks of the lagoon is a fascinating salt museum giving visitors a complete explanation of exactly how the salt pans developed and functioned over the years. It is from here that you can also take a ferry over to the Phoenician archaeological site of Mothya on Isola San Pantaleo.

A few miles further out to sea lie the Egadi Islands, and a walk along the salt pans of the Stagnone at sunset offers spectacular, unforgettable views.